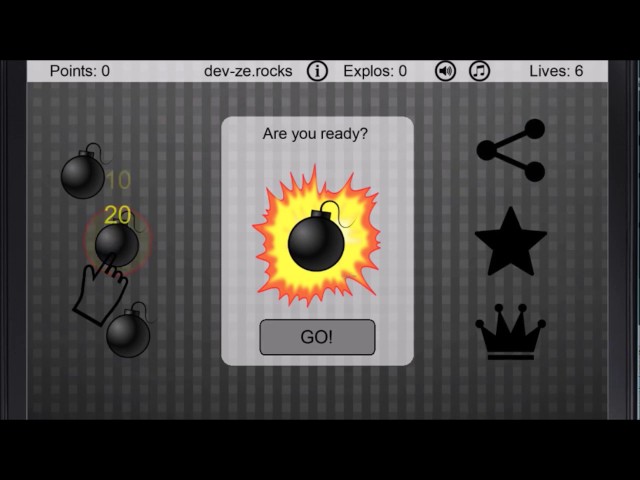 This is a complete game template that can be built for Android or iOS. The goal is to explode all of the bombs that fly over the screen. Tap and hold the bombs to increase their explosion radius and thus the points multiplier. Every level has a certain amount of bombs that need to be exploded and the bombs get ever faster and change directions.

-easy one touch game mechanics but with a new element (hold for points multiplier),

-some predefined levels with increasing difficulty,
-composer based,
-pause function,
-screenshake,
-sounds included,
-music and sounds can be switched on/off seperately,
-bleeding edge that shows the "health" (lives) of the player,
-basic share functionality,
-rate me button,
-ingame help (animated explication on start screen),
-online leaderboard via GPGS and Apple Gamenetwork,
-offline (locale) leaderboard via sql lite,
Interstitial and video ads via Appodeal at the end of each game.
-easy localization (it comes fully translated into english, german and portuguese (Brasil)),
-all settings and basic layout changings can be made from one centralized file,
-"animated" background,
-the player is asked if he wants to review the game after some time (or give some feedback alternatively),
-made for tablets and phones,
-iOS and Android,
-easy to change the theme by changing images and colors.

You can see the game in action for Android and iOS

The Lie - Cottage Of Secrets